The following are some of the new voices in Ecuadorian fiction: 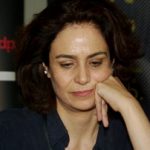 Gabriela Alemán has emerged as one of the most prominent voices of the new generation of Ecuadorian writers. Her stories have been translated into multiple languages, including Croatian, Chinese, Hebrew, French, as well as English, and she has been much-honored for her work with fellowships and literary awards. The Peruvian author, Fernando Iwasaki has stated that she is “one of the best contemporary writers of stories in the Spanish language,” (click here to continue reading).

Born in 1973, Cristián Londoño Proaño is a writer, producer, filmmaker and editor-in chief of the digital magazine, “Teoría Ómicron.” He has a Masters in screenwriting, and is currently working towards a PhD in Communication Studies.He has invented and developed the concept of the Andean fantasy novel. He has also published the novels, Doce Horas (2016), Underbreak (2015), El Tiempo Muerto (2015), Los Improductivos (2014) and El Instinto de la Luz (2011). Among his other publications are… (click here to continue reading).

A veritable renaissance man, as well as a representative of a younger generation of writers in Ecuador, Ney Yépez Cortés is recognized in his country as much for being a musician-performer, as well as instructor in the arts of Tai Chi, Reiki and Qi Gong, as he is for his fiction and journalism (click here to continue).