Gabriela Alemán has emerged as one of the most prominent voices of the new generation of Ecuadorian writers. Her stories have been translated into multiple languages, including Croatian, Chinese, Hebrew, French, as well as English, and she has been much-honored for her work with fellowships and literary awards. The Peruvian author, Fernando Iwasaki has stated that she is “one of the best contemporary writers of stories in the Spanish language.”

The daughter of Ecuadorian diplomat Mario Alemán, and  granddaughter of venerated Ecuadorian poet, Hugo Alemán, she was born in 1969 in Rio de Janeiro, and spent much of her youth abroad outside Ecuador, before settling in Ecuador. In Quito’s Universidad Andina Simon Bolivar she obtained a Master’s in Latin American Literature, before obtaining a PhD Latin American Cinema from Tulane University in New Orleans, where she also taught. She has also been a faculty at the Universidad San Francisco de Quito.

She began her literary career in 1994 with a book for children entitled, En el país rosado, (In the Pink Country). In 2003 she published her first novel, Body Time. In 2006 she received a Guggenheim Fellowship. In 2007, she published her novel, Poso Wells, which has been described as a ” noir, feminist eco-thriller, in which venally corrupt politicians and greedy land speculators finally get their just comeuppance.” A translation into English by Dick Cluster is due out in July of 2018.

In 2017, she won the Joaquín Gallegos Lara prize in Ecuador for her novel, Humo, (Smoke), and is now available through Random House (albeit in Spanish only so far), and endorsed by the New York Times as a “recommended read.” The narrative has been described as being about a woman who “returns to Paraguay seventeen years after having left. She returns to collect an envelope that her friend Andrei has left her. This envelope acts as a time bomb. When she opens it, memories flood back to her of a ‘land where everything has been scoured with cleaning fluid and is left wide-open’; The Chaco War, Stroessner’s dictatorship and a present-day scarred by fire.” 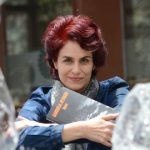 She is also a journalist, and among her other laurels in this genre are an award from the institute CIESPAL (Centro Internacional de Estudios Superiores de Comunicación) in 2014 for her piece, “Los limones del huerto de Elisabeth.” She has also written for plays for theater, storylines for illustrated narratives, and a radio series that was broadcast in Madrid.

Published in English is the following:

Literary analysis of her work:

“When the First World Becomes the Third:The Paradox of Collapsed Borders in Two Novels by Gabriela Alemán,” by John D. “Rio” Riofrio.