March of the Devils

31 Oct March of the Devils

Posted at 19:27h in Uncategorized by Ricardo Segreda 0 Comments
0 Likes 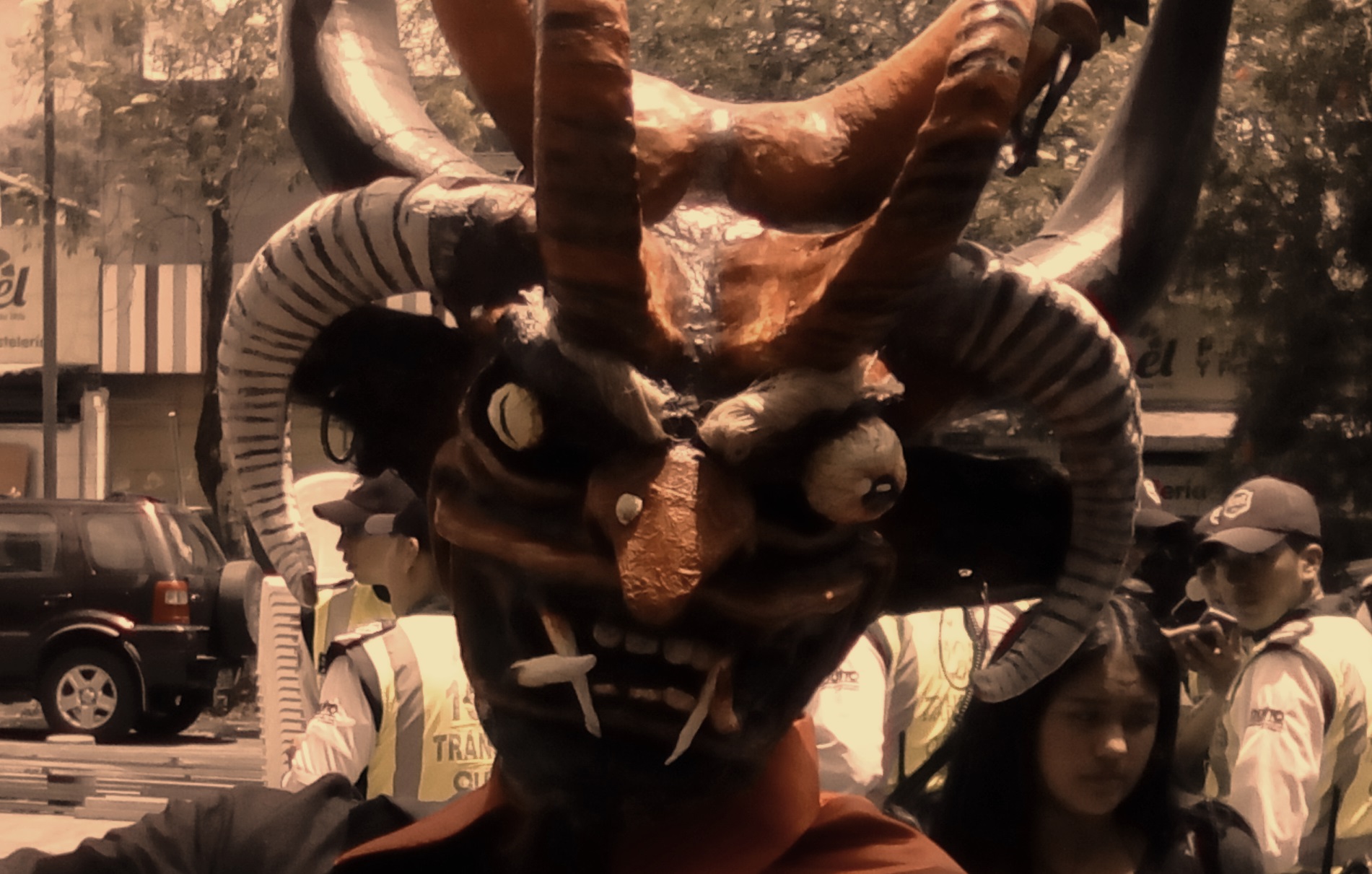 March of the Devils

Juan Paredes Garcia was eleven and woke up angry that cold morning in November in the south of Quito, as he has every morning of his life ever since his father left him four years ago for his new girlfriend in Guayaquil. He hated that alarm function on his iPhone (not the real thing, by the way, but a cheap imitation made in China), because it interrupted his sleep, the only peace he has, and reminded him of what a bleak world he has to face.

He knew that his older brother, Tino, was getting up too, and in a few minutes, after he went to the bathroom and changed into his school uniform, it would begin all over again. Tino, who was five years old than Juan, would “wrestle” with him, grabbing him and holding him tightly in a locked position, twisting his arms and calling him a “maricon,” or “faggot,” until Juan screamed because this hurt so much. Juan’s mother, Margo, as usual, would ignore this even though it was going on right before her in the kitchen as she made coffee while she smoked Marlboros, until Juan screamed in pain. At which, she’ll yell at Juan and tell him to stop making so much noise.

And that is exactly what happened. Afterwards, as Tino laughed, Juan grabbed the cheap toasted bread as well as the eight-ounce carton of milk his mother left out for his “breakfast,” and caught the bus to school.

In his classrooms, Juan went through the motions of being a student, but he barely paid attention to his teachers, and barely took notes, as he sat in the back of the classroom and meditated on how his brother treated him, his father’s abandonment (it was the talk of the neighborhood for years, with Juan walking through a gauntlet of taunts on his way home), what his mother did for a living – rummage through garbage for recyclable goods – when so many of the other children were a little better off because their parents with “real” jobs, and that he rarely understood what the teacher was talking about when Juan did try to listen.

When his father was around, he kept up with his homework, because that is what “Papa” expected of him, but when he left he gave up, and fell behind in his studies, and nobody, not even his mother, seemed to notice. That is also when Tino changed and became a bully (until then Juan regarded Tino as his best friend).  Now that he had fallen so far behind in his learning it had become harder and harder each year for him to catch up.  He feared that the other children now regarded him as “stupid,” and that only intensified his resentment toward them, especially the ones who were getting praise and attention from the teachers.

Juan made up for it, all of it – life at home, school – during recess and lunch.  He was tough and mean, quick to figure out which boys are weaker and more insecure than he is, and how to get other students to join in with him in making fun of them. And with his right fist, he would soon make them regret any attempt they make to defend themselves, even with words.  Juan was especially proud of himself when he could make another boy cry.  And what could that boy do? Go complain to one of the teachers? That would only provide the ultimate confirmation of that boy’s weak character.

But that particular day in when he woke up with his usual bitterness, would prove different. For the last few weeks the prettiest girl in school, also the smartest, with multiple academic honors, prompted a new and beautiful feeling in him. He knew what sex was – Tino introduced him to hardcore pornography years ago – but what he felt was a tenderness that almost bewildered him. “Is ‘this’ what people mean by ‘falling in love’?,” he wondered.

Her name was Elsa, and though he had known her, from a distance, for years, it was only now that he found himself thinking almost constantly about her – when he wasn’t distracted by his unhappy life. Otherwise, his mind kept returning towards her green eyes, her small mouth, her soft lips, her long black hair, her cute laugh…Juan had in his mind a movie, in which the Elsa and himself walked along the boardwalk in Montañita at sunset, holding hands and watching the sun fall into the ocean.

Juan would wonder how and when he could make an impression on Elsa. He also worried, too, that some other boy would win her heart before he could.

Such were the thoughts running through his head that one day on his way back home when the rear tire on his school bus ruptured, forcing the vehicle to make an abrupt stop. Being that most of the children on-board were only a few blocks from their homes, they opted to simply get off the bus and walk home, even though the driver was not supposed to let that happen, but he was powerless to stop them.

Thinking of Elsa, for the first time Juan found himself disgusted by the graffiti on all the walls and storefronts throughout his neighborhood, not to mention the garbage and vandalism. Juan now wanted a way out of the life he had right now, one with Elsa.

It was that truly peculiar boy, the one who normally never talks to anybody.  At school, during lunch, he just would just sit in a corner of the cafeteria all by himself, and not talk to anybody. Juan attempted to upset him last month with the help of his gang of “friends,” but the boy just ignored them, so they gave up, even though among themselves they kept talking about how strange he is. Why was he speaking now?

“I see you looking at Elsa. I know what you’re thinking. And you’re too ugly for her.”

Juan’s jaw dropped. How could this freak know all of this? He had never felt so naked in his life.

“You’re too ugly for her, and not only that, you’re stupid.”

The fear that Juan felt now morphed into an acute rage. He threw his books down and charged at the boy.

“Don’t call me stupid you damn worthless freak!” Juan cried out from a deep place within himself while, with a strength he did not know he had, he threw a punch right into the middle of the boy’s smiling face. The boy fell backwards, with his head making a loud “crack” sound as it hit one of the cobblestones on the street. A small trickle of blood emerged and the boy’s face turned a pale blue.

Juan’s heart began to pound against his breastbone as if it wanted to escape his body. He turned left, then right, looked up at the balconies and windows of the tenements, and wondered if anybody had seen what just happened. His legs now trembling, he picked up his books and ran through the dirty streets of Quito’s southern neighborhood, trying to understand what just happened.

He slowed down as he approached the small plaza near the old, degraded building he was forced to consider “home.” A brass band could be heard in the distance, playing the traditional folk melodies of his people. He looked off in the distance and could see a parade was approaching.

Led by the band, a procession of men in masks moved forward. It was the festival of the devils; the masks, all pointed a harsh, bloody red, were carefully constructed from wood and papier mâché, and were most notable for their elaborate use of goat horns, and the effect of large, bulging, accusatory eyes.  Some of the marchers adorned their costumes with bat-like wings strapped to their backs.

A drunken fat man, sitting on the sidewalk, with a beer bottle in his hand, looked into Juan’s eyes and proclaimed, “Beware! These devils come out every year to find sinners and take them to Hell.”

“I hope you’re a good boy!,” the drunk said, laughingly.

“Shut up,” Juan screamed, before running into the line of devils, pushing one of the boy “devils” over,  grabbing his mask, and sprinting towards the waterway on the other side of the plaza, tossing it into the stream of polluted water, before dashing into alleyways and crouching behind a restaurant dumpster, waiting for the parade to pass.

Night was falling as Juan crept up the creaky stairs to the fourth floor, where he, his mother, and his brother lived. He opened the door quietly, with the hope that Margo wouldn’t notice, but there she, leaning against the back of the sofa, cigarette in hand, facing him.

“I met up with some friends.”

“I don’t know. I was having a good time and I didn’t notice.”

“Papa isn’t worthless,” Juan blurted, surprising himself, being that he, too, resented the man, or so he thought.

“What did you say, you ungrateful brat?”

“Maybe he left for other reasons.” Juan couldn’t believe what he was saying.

“Then maybe you should go live with him – if you can find him. All I know is that I spent three hours worrying about you – you know what type of neighborhood this is – and now that you’re here I don’t want to see you. Go to your room and don’t come out until tomorrow.”

Juan slammed the bedroom door behind him and threw himself under his sheets, with the vague hope that he could plunge into an early sleep and maybe, just maybe wake up from it and discover that all that transpired in the last 24 hours was a nightmare, that tomorrow morning it would be the usual, with his mother smoking in the kitchen while Tino twisted Juan’s arms, but then there would be Elsa…

Sleep came over him much more quickly than he expected. He had a dream in which he got out of bed, went to the bathroom in the hallway, washed his hands, and saw that boy again, in the mirror, his face green, as well as luminescent like a lantern, smiling at him. He than ran back into the bedroom, but the boy’s face followed, grinning and growing larger. At this point Juan, with forced effort, screamed and with that, he woke up.

Yet he wasn’t on his bed, but rather on his floor. He looked over at his phone; it was 3:00 AM, all quiet except for the sound of footsteps in the hallway. Juan wandered if his scream, his mother was coming into to check up on him.

The door slowly opened and it was a devil, specifically the devil whose masked he tossed the day before into the waterway.

Juan’s disappearance the next day bewildered Margo and Tino. He left behind his iPhone and his wallet, not to mention all of his clothing, including his shoes. The police thought it might have been related to the death of one of Juan’s classmates, a boy with autism who was found dead on a street nearby from a concussion, with evidence of a blow to the face, but there was no sign of forced entry into Juan’s bedroom, which in fact had been locked from within and had to be broken into by Tino. Both cases remain unsolved.