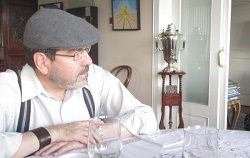 Vladimiro Rivas Iturralde (born 5 June 1944 in Latacunga, Ecuador) is a writer of short stories and novels, as well as an essayist, literary critic and university professor. After graduating from the Pontificia Universidad Católica del Ecuador  in Quito with a degree in education and linguistics, Rivas embarked on a career as an arts critic. In the 1960s, he directed the Quito literary journal Ágora, and from 1965 to 1968 wrote film reviews for the daily, El Comercio. He was also a theater director from 1969 to 1973.

The latter year proved to be a turning point in Rivas’ life. He arrived in Mexico on a scholarship from the Comunidad Latinoamericana de Escritores (Latin American Writers Community) and settled permanently, becoming a Mexican citizen and starting a family. He received a Master’s degree in Latin American Literature from the Universidad Nacional Autónoma de México. In 1974, he became professor at the newly founded Universidad Autónoma Metropolitana, Azcapotzalco in Mexico City, where he is still an award-wining professor. He stated in an interview with the magazine Matavilela that “under the seal of exile, my literary personality was defined.”

Rivas’ interests also extend beyond literature. He is an avid music lover and for several decades sang in choirs. He is also a promoter and critic of opera, and his articles have appeared in Milenio Diario, Pro Ópera and numerous other arts publications (see his comment on Christopher Franklin’s adaptation of the opera, Death in Venice, here). His literary fiction is an intense spiritual adventure, featuring lone figures exiled from home, love or themselves, searching for order in the midst of chaos. Rivas creates a world of mirrors, the reflections dancing with the subject’s interior world and the world outside.

Vladimiro Rivas Iturralde’s short stories have appeared in various anthologies of Ecuadorian and Latin American writers. His works have been translated into English, French, German, Italian, Portuguese and Bulgarian. The most easy to find is Contemporary Ecuadorian Short Stories (Quito: Paradiso Editores, 2002), an anthology he edited and compiled.

A sample of his work available in English, online (live link):

A sample of his work available in English, in print:

Contemporary Ecuadorian Short Stories, (available here), selection, prologue, and notes  by Rivas, and which includes his story, “The Invisible Footsteps.”

Rivas’ works in Spanish include:

Lorraine Caputo is a documentary poet, translator and travel writer whose literary works appear in English and Spanish in over 100 journals in Canada, the US, Latin America, Europe, Africa, Asia and Australia; 11 chapbooks of poetry – including Caribbean Nights (Red Bird Chapbooks, 2014) and Notes from the Patagonia (dancing girl press, 2017); and 18 anthologies. In March 2011, the Canadian Parliament Poet Laureate chose her verse as poem of the month. Caputo also has done more than 200 literary readings from Alaska to Patagonia, and is a prize-winning slam poet. Caputo was assistant editor and translator for the online arts journal, Australian Latino Review. She has translated the poetry of Cristina Rodríguez Cabral (Uruguay), Diana Vallejo (Honduras), Ana Bergareche (Spain-Mexico), Dolores Herrera (Galápagos), among other writers. You can follow Lorraine on her Facebook page, and on her blog, latinamericawanderer.wordpress.com.