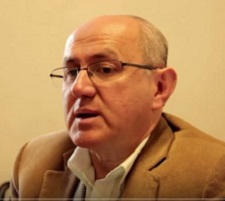 A professor at the Universidad Simón Bolívar in Quito, Raúl Serrano Sánchez is a novelist, journalist, and scholar. Born in 1964, he pertains to the “Post-disenchantment” Generation of Ecuadorian writers. His novels and short fiction anthologies have won multiple awards, including the Joaquín Gallegos Lara National Award and most recently the Ángel F. Rojas prize from Guayaquil’s Casa de la Cultura for his novel, Que te desnude el viento (Let the Wind Strip You). He is also the editor of the gay-themed anthology, Cuerpo adentro: Historias desde el clóset (The Body Inside: Stories of the Closet)