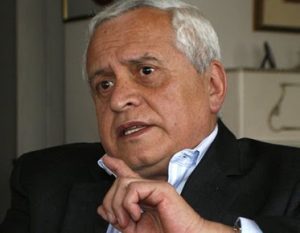 An ambassador and author, Francisco Proaño Arandi has represented Ecuador at his country’s embassies in Colombia, Cuba, Nicaragua, Costa Rica, Argentina, the former Yugoslavia, and the former Soviet Union, all the while cultivating his craft as a storyteller. He was born in Cuenca, in 1944, but grew up in Quito’s colonial-era historical center, which scholar Yolando Montalvo claims had an impact on his work. Much of his work is set in Quito, and often deals with themes of aging, defeat, and the passage of time, as well as societal collapse and transformation as new values arise with the emergence of modernity.

While in his 20s, Proaño Arandi founded the influential literary magazine, Z, and affiliated himself with the “Tzántzicos” movement, a reference to the indigenous Shuars of Ecuador and their practice of shrinking enemy heads. However, with the Tzántzicos, with their critical taking on of the writing establishment, their shrinking was literary, not literal. His fellow Tzántzicos included noted Ecuadorian authors such as Ulises Estrella, Rafael Larrea, Raul Arias, Ivan Carvajal, Humberto Vinueza , Abdón Ubidia, José Ron, and Antonio Ordóñez.

His career in Ecuador’s Foreign Service began in 1966, serving as a consul in Colombia. In 1981, during his time in Havana, he along with Ecuador’s ambassador were abducted by armed dissidents, but later released, and he remained in Cuba until 1984. Two years later, he resigned from his work with the Ecuadorian government in protest over President León Febres Cordero’s claim that that “there were no violations of human rights in Ecuador.” However, he later returned to his diplomatic career, being appointed as ambassador to Yugoslavia in 1990 just as the Balkan wars began to break the country apart. He later returned to South America, representing Ecuador in various Latin states before serving as ambassador to the Organization of American States.

Samples of his work available in English, online include (live links):

The Domain of the Others (from brooklynrail.org, translation by Harry Morales)

Final Spells of Vertigo in the Vestibule (from Bomb Magazine, translation by Harry Morales)