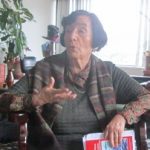 Fanny Carrión is an author and a poet, but she is also one of Ecuador’s most prolific scholars, and with extensive experience teaching both in Ecuador and the United States.
.

The scope of her scholarship has encompassed everything from language, culture, and literature to human rights, especially the rights of women. Her published essays include titles such as “Concerning the Rights of the Child in Ecuador,” “The Ecuadorian Precursors to Magic Realism,” “Americanisms and Ecuadorians in the Real Magic Work of José de la Cuadra,” and “Hispano-America, a Mestizo Culture,” “One Hundred Years of Solitude, History and Myth of the American,” “Borges is Already in Pious Eternity,” and “The Contemporary Ecuadorian Woman in Reality and in Fiction,” “The Vision of the Sacred in Emily Dickinson and Gabriela Mistral,” “Giacomo Leopardi, Precursor of Modern Poetry through Romanticism,” “Las Sangurimas, A Precursory Novel to One Hundred Years of solitude.” She has also authored an introduction to Uncle Tom’s Cabin.

Samples of her work available in English, online (live links):
.

Published in English is the following (includes link to Amazon.com):
.

The Golden Ear of Corn and Other Stories (Pontificia Universidad Catolica del Ecuador, 2010).