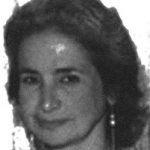 In terms of 20th century Ecuadorian authors, Eugenia Viteri is a pioneer in introducing feminist themes to Ecuadorian fiction, such as domestic violence, prostitution, and romantic-sexual intimacy between women. Her work has also been noted for its spontaneity and tenderness. She has been equally bold in her personal life, as founder of the Fundación Cultural Manuela Sáenz, named after Simon Bolivar’s mistress, who was a courageous contributor in the War for Independence.

Born in Guayaquil in 1928, Eugenia Viteri quickly became regarded as the family’s intellectual in her childhood because of her enthusiasm for the written word, which extended from Hans Christian Anderson and Charles Dickens, to poets such as Pablo Neruda. At her university, she was selected by her professor of Spanish to edit the undergraduate newspaper, “Student Hours.”

After completing her studies in 1954 in Modern Humanities at the Colegio Nacional Guayaquil, she won Second Prize in a literature competition for her story, “El Heredero,” (“The Heir”). The story deals with the dreams and reveries of a man who regards himself the father of female friend’s child. It concludes with him leaving her his property along with an explanatory letter.

Several years later, in 1963, she adapted “El Anillo” to the stage as “The Sea Brought the Flower,” which won Fourth Prize in a playwriting competition organized by the National Union of Journalists. In 1964, she married her husband, writer and politically active socialist, Pedro Jorge Vera, which coincided with a period of conservative military rule in Ecuador. The couple left for Chile, before moving to Cuba at the invitation of Fidel Castro. Following the end of the military junta in Ecuador, they returned in 1966, and in 1968, Viteri published “Only 90 Miles,” about the challenges a Cuban family experiences when it migrates to Miami following the 1959 revolution.  The protagonist, Elisa, longs for native Cuba, just as Eugenia longed for her native country during her exile, and thematically, the narrative serves as an allegory about the condition of women in Ecuador.

In 1969 Viteria became the Chair of Literature at the Colegio Nacional Veinticuatro de Mayo, a position she held until her retirement. She won the Guayaquil Municipal Gallegos Lara Prize in 1977 for her story, “Shoes and Dreams,” part of a story collection she published that year to much acclaim, and later translated into English as A Taste of Ecuador.

A new novel, The Black Alcoves, came out in 1984, and was dedicated to the “Ecuadorian woman who awaits the hour in which her love and her truth will be vindicated.” The subject involves prostitution and its related social and psychological dimensions. Viteri said of her theme, “women who have to do that work to make a living have my respect.” 1 Commenting on the hypocrisy of a sexist society, Viteri states that women in Ecuador “are blamed for being virgins, and also for not for not being so.”2

Viteri has been a pioneer as well in preserving and promoting the work of her colleagues to new generations of readers. In 1987 she edited The Basic Anthology of the Ecuadorian Story, which was later published in English in 1990.  Her philosophy of writing is that reality comes to literature through fantasy.  “The role of the writer is to sublimate and embellish reality.”3

The award-winning short story, “Shoes and Dreams,” from the anthology, A Taste of Ecuador.

The award-winning short story, “The Ring,” included in the anthology, Fire in the Andes.

Published in English is the following (includes link to Amazon):

A Taste of Ecuador