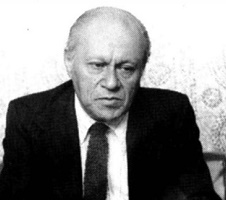 Demetrio Aguilera Malta (1909 – 1981) was an Ecuadorian writer, playwright, film director, war correspondent (Spanish Civil War), teacher, painter, and diplomat. Born in Guayaquil, the setting of his short stories and early novels, he was a member of the famed Guayaquil Group in the 1930s-40s.  These authors’ works reacted to the social climate of the times, highlighting the oppression of the cholo by the elites. He later wrote popular historical novels featuring Simon Bolivar, Francisco de Orellana and Vasco Nunez de Balboa.  In 1970 he published his masterpiece Siete lunas y siete serpientes, which was translated into English as Seven Serpents and Seven Moons in 1979.

His diplomatic career dominated the second half of his life.  Aguilera Malta was Undersecretary of Education and charge d’affaires in the Ecuadorian Embassy in Chile in 1947, Cultural Attaché in Brazil in 1949 and Ambassador of Ecuador to Mexico from August 1979 until his death in 1982. He was also a visiting professor at Scripps College and University of California-Irvine. In addition, he was a founding member of the Casa de la Cultura in Quito, Ecuador and the recipient of the Eugenio Espejo prize in 1981 and is considered one of Ecuador’s most important writers.

(Biography by Jeff and Eileen Sadler)

The first chapter from his novel, Babelandia (via Google Books, translated by Peter Earle).

The first chapter from his novel, Don Goyo (via Google Books, translated by John and Carolyn Brushwood).

On translating Seven Serpents and Seven Moons, from If This Be Treason: Translation and Its Dyscontents, by Gregory Rabassa (via Google Books).

The Apocalyptic Tropics of Aguilera Malta, by Luis A. Diez (via Jstor, account required).

Novels of his translated into English and currently in print (links to Amazon.com):