(From Abdón Ubidia’s anthology, FUNVENTIONS: A Book of Fantasies and Utopias, translated by Nathan D. Horowitz. available as a Kindle download on Amazon.) 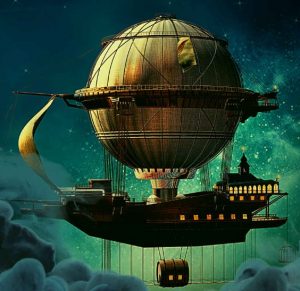 When the cities reached one hundred and two hundred million inhabitants, a patriarch made a radical decision to solve the multiple problems of those swarming hells.

It had nothing to do with futile birth control campaigns, mass sterilization, or the extermination of the poor suburbs.

Nor with the celebrated colonization of other planets, which served only to make those who left the earth (at a very great cost) transform, after a couple of generations, into races that bore little resemblance to ours, since the strange conditions of their new habitats –different gravity, different atmosphere, different magnetism, a different calendar, sometimes a different sun –mutated them in such a way that little trace remained intheir bodies of our bodies.

The old patriarch’s solution, accomplished, little by little, by genetic experimentation, over generations, consisted in reducing the human body to minimal dimensions. After a century, we were able to abandon the meter as a unit to measure our height. Now we speak of a person who measures five or six centimeters as short or tall.

The reduction of human stature has led to an immense savings of space and resources. In other words, humanity was never as wealthy as it is now. Our increasingly refined technology has allowed us to dominate other species with the sole purpose of controlling their will. And we now have access to sources of energy and food that were previously unimaginable. Two centuries ago, no one would have thought that today we would use birds to transport ourselves (pigeons as personal transportation, eagles as airplanes). Or that our robots would control the agricultural and industrial processes so efficiently. Or that we would raise herds of insects rich in protein and beneficial oils. The future has arrived, and in a way that humans never dreamed of.

Our ancestors, the giants, generally went extinct without any violence, as they got old and died of natural causes. However, a small population survived and now lives in the wild reserves of the ancient forests. They are few in number. They wander the wooded mountains emitting howls and thunderous noises. It is easy to regulate their population through the use of pests, viruses, and poisonous fungi.

Some of them escape our control. And we have no choice but to eliminate them immediately.

I belong to a brigade of Giant Killers, as we call ourselves. We don’t have much trouble accomplishing our mission. At the moment of killing them, I simply pray to my God and tell Him that they are, in truth, just the memory of another species, a different species, previous to our own, like so many others; a species that was not wise, that could not live on the earth and, perhaps, did not deserve to.

*I published this story in my book The Human Scale in 2008. Years later, in 2017, the film, Downsizing, appeared, which speculates about the same idea: the reduction of human size to save resources. Curiously, a PowerPoint presentation on the topic in the film is titled “Human Scale and Sustainability.” The reader is invited to compare.